Worldwide Amazon Seller Crackdown – How To Get Unbanned From Amazon?

Over the last couple of weeks, we have been contacted by several Amazon sellers that they were asked to confirm their identity via passport or driver license.

Sellers also reported they had their accounts put on hold or even suspended entirely.

Why is Amazon targeting some innocent sellers and suspending their accounts without any warning? The issue here appears to be that Amazon is cracking down on sellers even if they did nothing wrong.

The real issue seems to be that accounts are put on hold during that verification process, causing people to lose a lot of money every day. Some sellers report that it can take up to 2 to 3 weeks for those documents to be verified and in some cases, even legit documents fail to get the Amazon accounts reinstated.

Some companies start to take advantage of the Amazon seller crackdown and target specifically sellers who had their accounts suspended. Some go as far as to guarantee 100% success rate with their appeals letter. Fake reviews are created on websites like feefo.com to give an impression that their service is legit. However, how can they be trusted if they’re claiming to have a 100% success rate appealing Amazon seller suspensions?

We have so many people contacting our blog and complaining that they felt scammed by those companies charging $300-$700 for some poorly written appeal templates that in most cases don’t work.

Don’t get me wrong — there are legit companies who actually really help sellers get back to selling on Amazon. However, they don’t charge $700!

Any legit company would never claim that they have a 100% success rate as that is virtually impossible. Amazon suspends thousands of accounts and there are certain cases where it is just impossible to get the accounts reinstated. And in some cases, the only solution is to open a new account or to stop selling on Amazon altogether.

So the big question is: “how do I find legit Company that doesn’t just rob me of $700 for some ridiculous for service?”

We have tested and discovered two companies who help suspended Amazon sellers to appeal their accounts suspensions or open a new account. 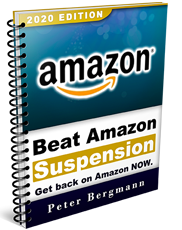 The first one is actually an eBook called ‘Beat Amazon Suspension‘.

They have different packages available starting from $27 up to $77 depending on your circumstances. The Silver package only has basic email support so if you want full email support go for the Gold Package, we went for the platinum package to have full Skype and premium email support.

I really liked that I had the chance to discuss our specific case on Skype which really helped me a lot to answer all my questions and open a new Amazon seller account.

So we signed up for BizzExpert’s seller suspension appeal service and really liked how they answered all our questions. Our suspension case was a little bit more complicated, I could see that they have a lot of knowledge on how Amazon suspends accounts as well what Amazon wants from sellers in their appeals letter to reinstate their account. BIzzExpert charges $199 for a full Amazon appeal suspension package, which is cheap compared to all those other companies who charge 400-700 for the same service.

No matter which company you choose – BizzExpert.com or the Beat Amazon Suspension guide,— don’t get scammed by companies charging double the price or even triple for inferior service.

How Amazon Destroyed My OEM Accessories Business By Suspending My Account

Amazon Suspended – How To Get Back

How To Get Back Selling